I’m NOT into finding some low budget or half done Indie game somewhere, and review it to berate it and belittle it because it has flaws..

No me I’m into smacking the shit out of big titles who waste millions of dollars developing a game that a blind monkey can see has some major flaws in it..

No pampering, the mistake of a professional is worth ten times that of the average person.

In that spirit, welcome to the Crysis 2 review

Sadly this game was leaked online as beta a few weeks before its official launch, this will in the end affect sales, I don’t reckon by a lot but it surely wont help boost the sales either, but this is no excuse to pamper the game with nice reviews just because it was the victim of a leak.

Crysis 1 was a high budget technological demo with a game on top of it, the game wasn’t top notch but for fuck’s sake there was a game over it somewhere, and it was engrossing and pretty damn fucking epic at some points in the alien invasion spreading straight into a big lush jungle.

So in that spirit me and others anticipated Crysis 2

I half expect the game to look sweet and have some epic battles again even if the script writer is someone in a coma or on too much weed of the bad kind.

Crysis 2 is set in New York, the setting of the invasion moved to New York, don’t ask why as if New York hasn’t been invaded by countless freak monsters in medias already.

Monster freaks must have a hardon for Lady Liberty or something.. 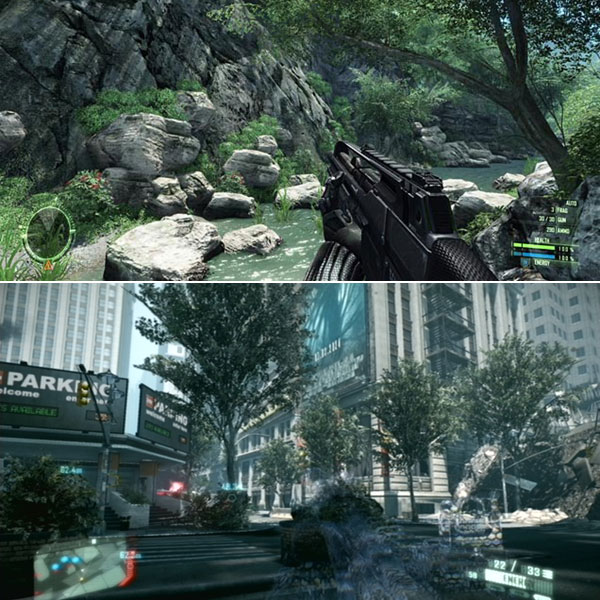 from digital forest to digital city, hmm, you decide if you are impressed here..

The game story is beautifully nonsensical, the intro sequence starts a bit déjà vu and moves on to the just plain fucking weird in no time. Headache guaranteed if you try to understand it fully.

At some point  someone thought it to be a good idea to kill off  Prophet one of the main heroes of the first game , as if players didn’t relate to heroes, and not only that but decided it’s also better to make him shoot himself in the head right in front of you in the intro for no good reason.

Ouuh suspense my ass.. I’m not spoiling anything, its all there in the god damn first minute.

Supposedly this is to draw you into a suspenseful mood and you have to go play around the entire game to figure out what the fuck really happened in the first minute..

Thrilling for a filler episode of the series. Not !

The story gets better at the end, but the initial intro presentation at first is both bullshit, upsetting, cheap and moronic.

Ok moving on to the visual, this is Crysis 2 after all.

The lighting in this game is simply unmatched as of its release date.

In some ingame movie scenes, you honestly get confused if you are looking at CG or something real, you are purely blown by the visuals and graphics.

The characters facial detail level is better than the low poly low shader faces of Crysis Warhead, but Crysis 1 still has the best visual faces of them all yet to date. 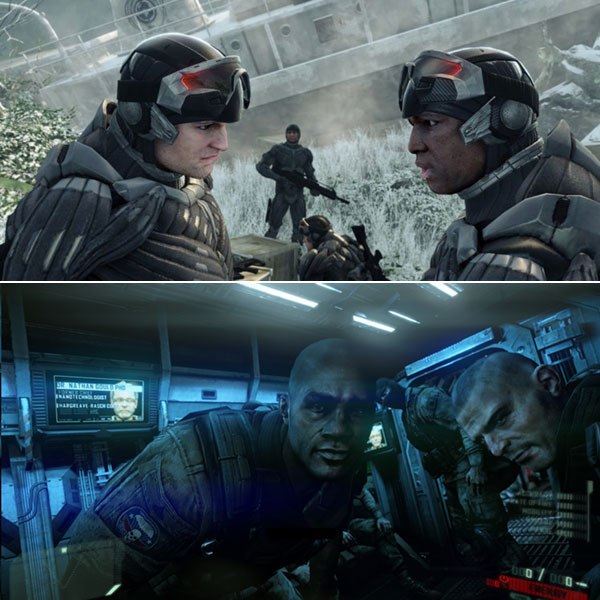 top: crysis 1. bottom: crysis 2. much like the moon race the past is still better than the present

Performance wise the damn thing is pretty optimized, it runs pretty fast, apparently much faster than the original Crysis, in this the developer’s claim that it was faster is indeed true.

Very nice stuff, although you only have 3 three graphic settings to screw around with (without tweaking the .cfg files yourself). I played the game twice just to see how different the visuals are on medium or high levels labeled Advanced and Hardcore accordingly.

There isn’t much of a difference let me tell you that, apart from the frame hit the high setting makes the game generally look blurrier also, personally I prefer sharpness so I prefer the medium setting.

Moving on to gameplay.

The weapon feel in this latest Crysis is still limp compared to games like Call of Duty.

The weapons feel light, so you cant draw much pleasure from shooting the fucking shit out of the enemies around you, too bad really. You get used to it, but it’s nothing to write home about. The only consolation is that you can now pickup up a heavy machine gun and shoot the fuck out of everyone, that’s pretty damn sweet let me tell you that

You get to upgrade your suit this time around too which is cool.

The aliens have some cool big robots you have to fight off, but for the aliens themselves someone decided to change the design since the original and instead of keeping them the creepy cool floating machine squids of the first game decided to put them now in freaking stupid biped suits. Honestly what the heck is wrong with that.

this is the cool and epic moments and aliens we used to have in Crysis 1,  say goodbye now 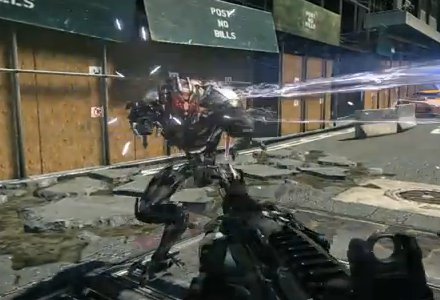 and this is what we have now, that’s seriously sad.. Did anybody hire M Night Shyamalan ??

The background music is pretty good, trying to be epic but the game itself can barely follow suit even with its sweet graphics.

As for the levels themselves, well there are two sides to that story.

Technically its rather impressive to see buildings and bridges getting ripped apart in front of you, pretty damn impressive.

But the levels don’t feel as open ended as the original jungle levels, plus lush digital forests are simply more impressive than a digital city regardless what you do.

I know the developer said that now New York is the new jungle, but I’m not sold.

As for the level design itself, there is no logic to it, it’s just sitting there with enemies spawning in it, you seriously get the feeling that someone just placed buildings together, placed a few AIenemies around and expects you to go from point A to point B in each level shooting everything like Cartman hunting hippies.

There is nothing to credit in the level design from a gameplay perspective, this surely aint no Bad Company or Call of Duty type of game with smart gameplay levels.

To be fair you do get some fun challenges at some points but only because the AI is swarming you with units left and right.

This should be more fun in multiplayer where characters dont follow any particular points when playing. 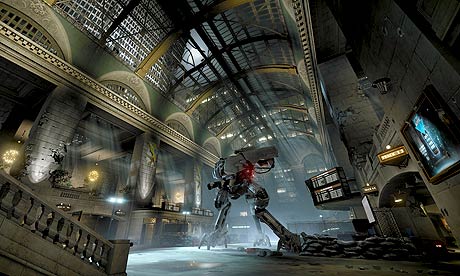 Well, at least this alien robot is cool and this level is a challenge to finish

As for the credit roll movie, I don’t know what is wrong with Crytek and cheap credit movies showcasing the warrior suit, they did this before in Crysis Warhead, it was cheap then it is cheap now.  Really for such a high profile high budget company please guy show some self respect this isn’t a game done by one fifteen year old in his basement. They even decided to mix in some live footage with this one, really guys there is something called suspension of disbelief, don’t screw with it..

I don’t get what angle Crytek and the Yerli founding brothers are playing and I honestly don’t understand it. Do they create games just to show off technical achievement, or they actually want to create games with real gameplay ? It’s all very confusing looking at Crysis 2. If their sole intent is to showcase and sell the engine to other AAA developers then why on earth didn’t anyone develop a game on a Crytek engine apart from them, we hear online gossip that their license schemes don’t make things any better either.

As I said, it’s confusing.

In the end Crysis 2 itself is not a bad game, it is rather playable and the graphics rule, but gameplay it’s a let down, or average at best and the story is sometimes annoyingly stupid.

It just doesn’t have any of the epic feel of the first one, I’m not saying the first Crysis was perfect but it had epic moments,it’scalled Crysis after all !!

Kudos for the technical achievement on this game for the development coders, a pat on the back for the graphic designers, and a look of confusion at the gameplay designers and decision makers.

This is a good game in its own right, just simply not a kickass game and whoever claims it is one in a review is full of shit.

With all this tech and high budget this game could have been epic for real. Too bad.

There are just too many silly apparent things to criticize about it.

I cant say this enough,  games are not just about pretty graphics,  games need good gamplay or else we’d call them interactive movies instead.

I cant give it a Kickass Star, nor is this a failure to give it a Lump Potato rating, so on the average scale of 1 to 5 Quills, with a clear conscience I can give it 4  Quills tops for being above average good, but not very good nor kickass